Those who likes the nudist style will find here the best beaches in Costa Brava to practise it.

Those who likes the nudist style will find here the best beaches in Costa Brava to practise it.

It is the first accesible beach by car in Costa Brava after cross the border with France but it is so hidden and far from the highway and from the...

Located at the south of Cadaqués, it is a beach formed by stones and rocks that has a big depth. It is well known because its nudist tradition... 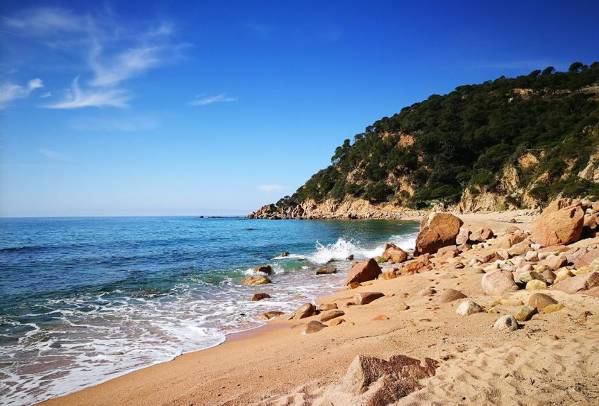 11 kilometres far from the inland town of Santa Cristina d'Aro and at the south of Sant Feliu de Guíxols. The best way to get there is through...

It is one of the nudist paradises of Costa Brava and one of the most emblemathic beaches in Begur coast. It is internationally known as a big...

Cala Murtra is located 7 kilometres far from the town centre of Roses. It is a place practically virgin and alone, searched by a lot of people to...

Located only 2-3 kilometres far from the village centre of El Port de la Selva, this cove is formed by stones and gravel and offers us a marvelous...

This beach is part of Santa Cristina d'Aro, but it is completely away from that village. Is located between Sant Feliu de Guíxols and touching... 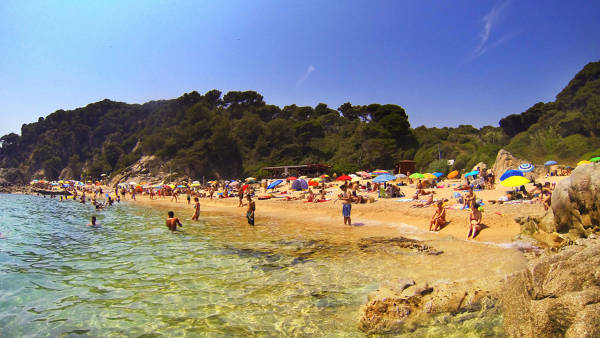 Sa Boadella is practically the only virgin beach in Lloret de Mar. Located in a privileged enclavement, accesible through a pine wood between...

Nudisme has become one of the most popular styles, especially in last years and the number of the inhabitants increases and they are not shamed to show themselves to the world as they are to be 100% tanned. That's beacuse since "nudism boom" a lot of beaches have destined a part or a side to nudism or also have been qualified some spaces as unique places especially for nudists. And in Costa Brava is not going to be different.

That's because, from Visita Costa Brava, we have selected the ones that, for us, are the 8 best nudist beaches.

Without going further, in Lloret de Mar we find the first one.
Sa Boadella, one of the best beaches in all Costa Brava, has been adapting to the new times and since several years has autorized in one side (the farthest part to the entrance) nudism practise becoming one of the best nudist beaches. The delimitation between nudist area and the other one is marked by some rocks that enter to the sea from the seashore.

In the natural area of Massís de les Cadiretes, between the highway that take us from Tossa de Mar to Sant Feliu de Guíxols, where there are some urbanisations, we find the next two beaches.
Vallpresona beach is the first of them, passed Cala Salions residential area, we find this beach far from the towns, so you must go with car and leave it far to walk 1 kilometre. It is surrounded by a natural environment of vegetation and rocks ideal to move away the mass that we find in the main big beaches and enjoy a nice time alone. That's because it is very visited by nudists and also by couples that want privacy.
Some kilometres to the north, next to Rosamar urbanisation, we find Cala el Senyor Ramon, located like the other one far from the towns in the highway between Tossa and Sant Feliu. This one has a parking area but still that is usually visited only by nudists and couples looking for a quiet stay without people.

We move towards Begur, where we will find probably the best nudist beach in Costa Brava.
Illa Roja is an international icon known as one of the best nudists beaches of the area and in the world. Even have been organised some meetings in Naturism Day and has become a nudism paradise in Costa Brava. It has an easy access and it is very visited especially by nudists, although also atract couples and French people. Is one of the most symbolic in Begur and it has a characteristic reddish islet in the middle that divides it into two and gives the beach its name.

We move many kilometres to the north until Cap de Creus, where we will find three more nudist beaches.
The first one in Roses. 7 kilometres far of the centre of the town, there is Cala Murtra, a practically virgin and lonely place that is searched by a lot of people to practise nudism. It is surrounded by a beautiful natural environment and it has a parking area, although it is a little bit far and you have to walk a little bit to arrive to the beach. It is very visited by nudists and also by couples and hikers.

Another one in Cadaqués, where during a lot of years the famous painter Salvador Dalí spent the summer.
Located two kilometres at the south, Sa Conca is a beach formed by stones and rocks, with a lot of depth and it is known as a big nudist tradition. It has a parking near so it has an easy access and it is visited in effect by nudists. Is also known because since 1970 is celebrated the Cadaqués International Music Festival.

The next one, at the end of Cap de Creus, we find it 2-3 kilometres far from El Port de la Selva centre, behind the port.
Cala Tamariua is a very quiet space between rocky formations and it is usually visited by nudists that are looking for totally relax. Also usually goes couples and hikers that are going through the beautiful area of Cap de Creus and it has a parking near to leave the car.

And finally, the end this TOP8, we move to the northern part, passed Portbou.
Practically touching the France border, it is the first accesible beach by highway in Costa Brava, we find Platja del Pi, a stones beach in the middle of a beautiful natural environment of cliffs and pines where we also find, next to the beach, a cave and a waterfall. It is an space that offers a lot of calm and it is very visited by nudists.